With the help and guidance of Dorothy Slentz and Dr. William E. Kraus (Duke Medical Center), we have developed a working protocol for isolating primary human skeletal myoblasts from volunteers of the Duke Medical Center. Previously, we have conducted all work with the immortalized C2C12 cell line bought from ATCC. We have had much success with these cells thus far, but a more physiologically-relevant model would draw from a human cell source.

A relatively new area of study is that of microRNAs (miRNAs). MiRNAs are short, single-stranded 20-22 nucleotide-long mRNA strands that exist in the non-coding regions of genes. They often act as repressors of repressors - so essentially they upregulate target genes. Several miRNAs have been identified as playing roles in myogenic maturation, and we are studying the effects of several on our tissue-engineered constructs. By modulating the correct miRNAs at the right times, we hypothesize that our skeletal muscle cultures will exhibit accelerated and enhanced maturation.

In vitro microphysiological multiorgan systems using human cells provide a novel method to identify promising drug candidates and eliminate potentially toxic compounds from clinical trials. Historically, many drug failures have been associated with mitochondrial toxicity. In order to reduce attrition rates amongst trial drugs, due to mitochondrial toxicity, applicable screening methods are needed for early stage drug toxicity testing. Oxygen consumption rate is an indicator of normal cellular function and a parameter to study mitochondrial function . We are creating a reproducible system to measure skeletal muscle metabolism by non-destructively monitoring the oxygen consumption rate of our tissue engineered skeletal muscle bundles. This will allow us to reliably test the metabolic effects of drug candidates on our human skeletal muscle constructs.

In 2012, we were awarded a Tissue Chip Award for Model Systems from the National Institutes of Health (NIH). [More information here.] Our model system includes tissue-engineered blood vessels (TEBV) and tissue-engineered human skeletal muscle bundles. In developing the muscle bundles for the microphysiological systems, we have optimized the protocol for culturing mature human skeletal muscle capable of spontaneous and stimulated contraction. We will be combining the TEBV and muscle bundles onto one "tissue chip," with chambers connected by a perfusion system.

Morphology and ultrastructure of differentiating three-dimensional mammalian skeletal muscle in a collagen gel. (2007)

Effect of cyclic stretch on beta1D-integrin expression and activation of FAK and RhoA. (2007) 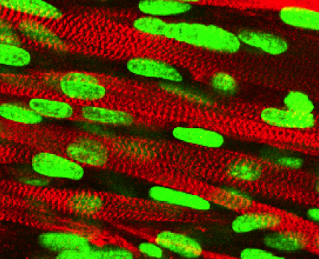 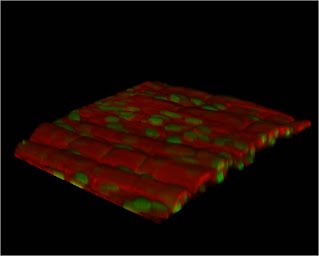